Inside: Our fatal error in planning a sleepover party for our 5-year-old daughter? Assuming all her friends from school behave the same way she does.

My girl Abby just turned five on Saturday. Five! The typical birthday party for her group of friends from school is: Maybe this makes me a bad parent, but I hate those parties. As we’re driving to them, I always have an internal debate on how short a time I can get away with staying. Two hours? One hour? I’m not above bribing the girl to get her to leave early.

Photo by Karina
So to make this birthday special and avoid perpetuating the birthday party drag for other parents, we gave into Abby’s requests for a sleepover party. We said she could invite two other girls from her class. We could manage three girls. That was definitely doable. But then she said, what about so-and-so? Can I invite her? And we said, sure – what’s one more girl? And then it was, oh but I really want to invite her too! Pretty please? Heck, the girl only turns five once. In the end, we invited five girls. Not everyone would be able to make it, after all.

Mom #1 replied within the hour. Can I bring so-and-so’s older sister too? What kind of brute would deny a sisterly bonding opportunity? I said of course! Mom #2: Yes. Mom #3: Wow, you’re brave! Yes. Mom #4: Count us in! Mom #5. No response. Okay, we told ourselves. Six girls total. We can do this. It’s just for one night. Then the day before the sleepover, we got an email. Mom #5 had forwarded the message to Dad #5 who’d have their girl that weekend. Girl #5 was in too.

A Fatal Error in Judgement (Or Two)

When you send an invite for an adult party, you never get 100% acceptance. But what didn’t dawn on us before sending the invite was this: we were offering up a FREE NIGHT OF BABYSITTING. Of course everyone was going to accept. Lesson learned. Our other fatal error? Assuming all Abby’s friends from school behave about the same as Abby. Now, Abby is no perfect angel. I don’t think they make 5-year-olds in that flavor. And I’m not saying that the other girls were Bratticus Rex. Some of the girls were on their best behavior. But we weren’t quite prepared for the other ones… 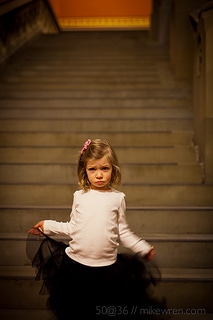 Photo by Mike Wren
I’ve shared my thoughts on whining before. It’s a natural inclination for kids to whine when they aren’t getting what they want. But you know what else is natural? Kids crapping their pants. One little girl whined about EVERYTHING. She didn’t like the movie Brave, she didn’t want strawberry cupcakes (which happened to be the best I’ve ever tasted), the wood floor was too slippery, she didn’t like the dress she was wearing, someone called her a crybaby (imagine my shock), she didn’t want to go to bed, she wanted to sleep next to so-and-so but still wanted to be in the middle of the bed – and on and on and on. PLEASE. MAKE IT STOP.

A handful of the girls got a kick out of running up and down our stairs. I kept an eye on them every now and then to make sure everyone had mastered the art of stairs, and they seemed fine. But as the night went on, their crazy meter spiked. 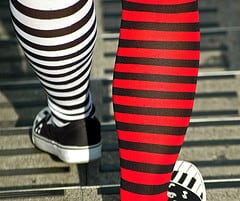 Photo by Jean-François Chénier
At one point, I was standing at the top of the stairs, watching a procession of girls run down the stairs. One particularly rambunctious girl lost her footing and started tumbling head first down the stairs. I nearly had a heart attack. Visions of broken necks and lawsuits flashed in front of me. The girl was fine, but I couldn’t take a chance on it happening again. So I corralled all the girls back upstairs and grabbed a baby gate from the closet to put at the top of the stairs. Picture me, 7 months pregnant, standing at the top of the stairs, trying to maneuver a cheap baby gate closed. You know, one of those baby gates that won’t close until you pull it out from the wall, and then it closes perfectly – but the minute you put it back in position, it gets stuck with the bar halfway up. The girl who tumbled down the stairs walks to where I am. We’ll call her Drusilla. Drusilla tries to pull the baby gate, which is currently being held up by me, away from the wall so she can squeeze through and go back downstairs. Me: “You may not go downstairs. We’re staying upstairs now.” Drusilla looks at me with an impish smile. And shoves me. I lose my grip on the baby gate, and it tumbles down the stairs. A fleeting thought registers that I’m glad the baby gate went down and not me. And then that fleeting thought turns to anger. She PUSHED me. A grown-ass adult. So just as she’s starting to head down the stairs after the baby gate, I pick her up under her armpits and carry her to the next room – even though I’m not exactly supposed to be dead-lifting 40 lbs at the moment. Luckily, in the time I carried Drusilla away from the stairs, my partner had already rescued the baby gate from downstairs and got it back in place. Here’s what hit me later, after the adrenaline dissipated: Generally, kids listen to direct requests from adults they don’t know very well – even BETTER than when they’re with their parents. This wasn’t the first instance that night that Drusilla disobeyed a direct, clear order. If she didn’t listen to us at all, I hope that doesn’t mean she NEVER listens to her parents. Speaking of parents… 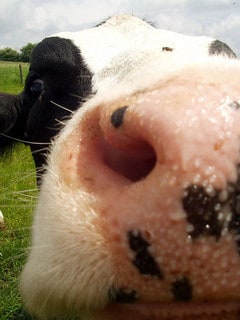 Photo by Stephan Mosel
One dad showed up to drop off his girl, and as soon as she ran off to play, he said, “My training is in architecture, do you mind if I have a look around?” Me: “Sure.” Usually when someone asks that, they wait for a tour by the homeowner. But no. The dad started wandering through the house before I could catch up to him. Into our master bedroom and bathroom (which I hadn’t exactly cleaned for touring purposes before the party), downstairs where no one else was at the moment, opening hall closets, into the laundry room – EVERYWHERE. Really?

The girl who didn’t listen and the one who wasn’t happy with anything? Their parents were the late ones.

Got any kid sleepover horror stories? Let’s commiserate in the comments below.