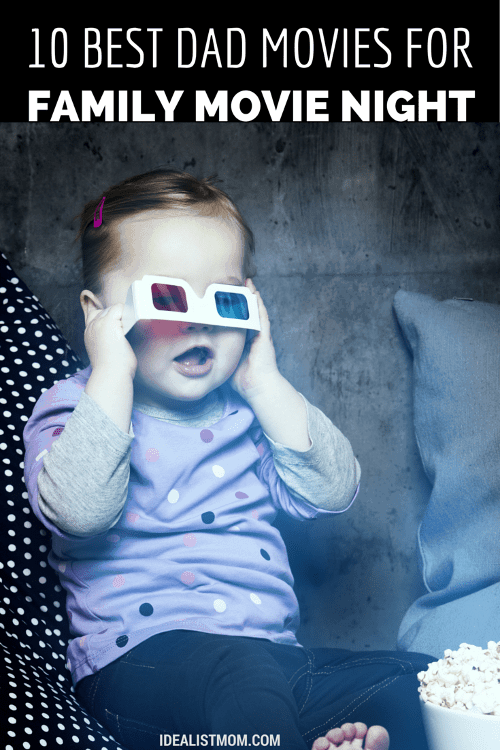 Inside: Watch one of the 10 best dad movies for family movie night on Father’s Day (or any day). They’re family friendly, plus they feature awesome fathers.

At our house, we adore family movie night. The kids cozy up on the couch between my husband and me, we gorge ourselves on pizza and/or fresh-baked chocolate chip cookies, and we all get wrapped up in the story – from Big Hero 6 to Wreck-It Ralph. But one thing about our family movie nights nags at my conscience. My husband never gets to pick the movie. His favorite movies aren’t always family friendly – Tommy Boy has a few colorful scenes I’m not ready to explain, and The Bourne Identity would probably give the kids nightmares. But even when he suggests something perfectly fine like a sports movie, it never seems to make the cut.

This year, one of our Father’s Day gifts is that Dad gets to pick the movie. It’s the least we could do for the man who makes 99 percent of our meals, keeps the yard from looking like Hogwarts’ Forbidden Forest, and can get the kiddos from cranky to giggling in less than 30 seconds. With that said, Austin Powers is still a bit much for our under-thirteen crew. How can we find a movie that Dad wants to watch but won’t result in notes from the kids’ teachers about risqué language? Oh, behave.

My husband and I sat down and put together a list of family-friendly movies he’d love to watch for Father’s Day. Or any day, for that matter. All movies in this list are rated G or PG. As an added bonus, these movies feature awesome father figures and/or storylines about fatherhood. Enjoy! (p.s. We tried to avoid movies that portray dads as bumbling fools because newsflash: They’re not.)

† This site is reader-supported. When you buy through our links, we may earn an affiliate commission.

5. Back to the Future