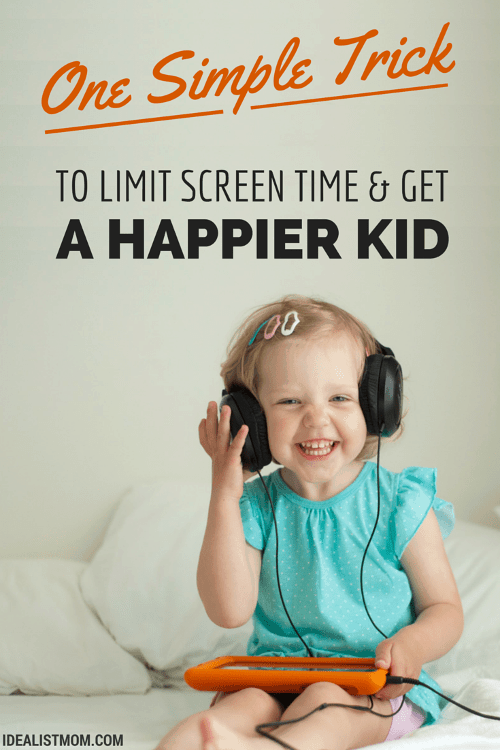 Inside: As parents, we know we should limit screen time for our kids, but how? Here’s a simple trick that works. Bonus: You’ll end up with a happier kid, too.

Confession: I use the iPad as a babysitter. When I’m trying to get my toddler down for a nap, or I need to pay the bills, or we’re on a road trip – I give my 6-year-old Abby the iPad for a while. We haven’t been officially limiting screen time because we felt like her media diet was at a healthy level. Then last year, we noticed a disturbing phenomenon when Abby’s done with screen time, whether she plays with apps for 5 minutes or 45 minutes. She turns into a zombie. A cranky zombie. She whines. She pouts. Sometimes she throws full-on temper tantrums. But that’s not even the worst part. On road trips, one of Abby’s favorite ways to pass the time is for us to give her math word problems to solve. Like this: “Suppose you had 10 pieces of cake for your birthday party, but before the party starts your stressed-out mom eats 3 pieces. How many pieces of cake are left?” The kid eats that stuff up. She loves it so much that I put together a road trip experiment for her, complete with math problems and charts. Then on a road trip last year, we noticed that after Abby had some screen time, she was completely incapable of solving even the simplest math problem we gave her. It’s like her brain stopped working.

The fact that even a little bit of screen time can make my child’s brain shut down? It creeped me out. And then I saw an article about how Steve Jobs and other high-tech executives severely limited screen time for their own kids. I wondered: What information do they have access to that the general public doesn’t? I don’t know the answer to that, but I do know that when my kid gets too much screen time, she’s absolutely no fun to be around. As it turns out, the research shows that when you limit kids’ screen time, kids behave better, get more sleep, and score better on tests at school. Plus, kids who don’t spend every waking minute glued to a screen are much better at reading human emotions. Still, I get a little panicky at the thought of going cold turkey with screen time for my kids. It’s super useful in a pinch. We were already following most of the advice I found about limiting screen time for kids. I’d have to get a little creative.

How to Limit Screen Time – And Get a Happier Kid

One day, I sat down with the iPad when Abby was busy in her room. And that’s when I realized our innocuous little tablet was loaded up with nearly a hundred kids’ apps. At night, I’m pretty sure the apps get together and multiply like the little brain-sucking Gremlins that they are. In that moment, I decided to do three things: “Abby,” I called. “Can you come down here?” She came down the stairs and stood in front of me on the couch. “What?” “I want to clean up the iPad a little. We have so many apps installed, I’m afraid we’re going to run out of room for new movies.” I knew that would get her – she’d watch movies 24-7 if I let her. She sat down next to me. “I’ll point to an app, and you tell me whether it’s fun. If not, we’ll just take it off.” “Okay,” she said. We cleared off quite a few that way, but I wasn’t done. 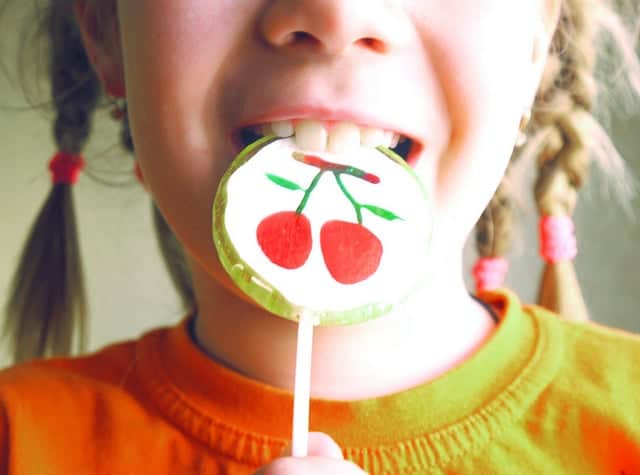 Photo by feel-the-silence
“Alright, our next step is to organize the apps we have left. Have you ever noticed that some apps use your brain more, like if you have to do math problems or read a story?” She nodded. “So we’re going to put those apps in a folder called Brain Food. Everything else, we’ll put in a folder called Junk Food. What do you know about junk food?” “Um,” she said. “You’re not supposed to have it very often?” “Totally right. Because it’s not good for your body, right?” She shook her head. She looked a little scared about where this was going. “These apps are the same. The Brain Food apps are a good workout for your brain muscle. But the Junk Food apps – you shouldn’t be using those very often because they’re not good for your brain.”

I made the two folders and handed the iPad to Abby. “You can tell me which folder you think each app should go in, and we’ll talk about it if I have a different opinion.” After a few, she got the hang of it. Stack the States? Brain Food. Angry Birds? Junk Food. Related: 7 Brain Food Games: The Best Educational Apps for Kids 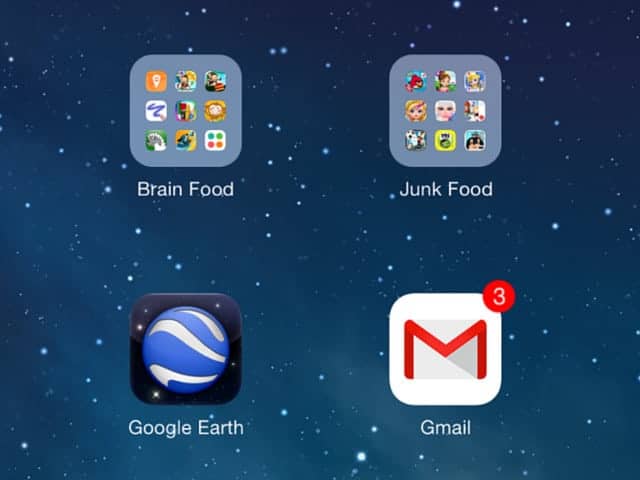 Next, I needed to set a limit and explain why. “Have you ever noticed that sometimes after you use the iPad for a while, you feel grumpy?” She looked down at her lap. “Yeah.” “I think it’s because you’re getting too much Junk Food. Let’s come up with a rule for when you use Junk Food apps. It should be a special time that doesn’t happen very often.” We settled on road trips, and that’s it. But still, I wasn’t done. I wanted a time limit for regular everyday use. I showed her how to use the built-in Timer app and set it to 20 minutes. We already have a rule that she has to ask before sitting down with the iPad, but now she can use it for only 20 minutes and then she has to stop and do something else. Related: Keep Your Kids Happy With This Road Trip Experiment 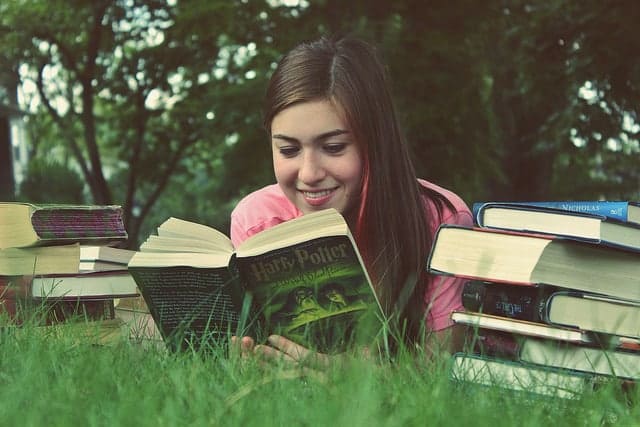 But Did It Work?

Ever since we organized the kids’ apps into Brain Food and Junk Food and set the 20-minute limit, Abby’s mood has stopped taking a downturn after screen time. In fact, she used to ask to use the iPad every weekend day and even some weekdays after school. Last weekend, she didn’t ask to use the iPad once. But do you know what she did ask for? Math word problems. Atta girl. Related: 24 Best YouTube Videos for Kids to Change How They See The World

Check out 7 Brain Food Games: The Best Educational Apps for Kids for a list of our favorite apps.