Inside: If you’re worried about how to stop swearing in front of your kids, the swear jar is the wrong fix. Here’s what really works.

One weekend morning last month, I was drinking my coffee in the living room alongside 6-year-old Abby and 10-month-old Bailey. Abby was coloring, and Bailey was perfectly still, watching her sister. I actually didn’t realize Bailey was capable of sitting that still. “Look at Bailey watching you,” I said. “She’s learning by watching you.” Abby was quiet for a couple seconds as she finished coloring a unicorn in rainbow colors. Then: “Did I learn by watching you?” “Sure,” I smiled, taking a sip of my coffee. “Tell me something you learned by watching your mommy.” “How to say bad words.” I was expecting to hear “The Alphabet Song,” or “how to brush my teeth,” or at least “the basic concept of Pinterest.” But no. In my child’s mind, my most notable contribution to preparing her for the world is the fine art of cursing. Bloody hell.

How to Stop Swearing?

I reflected back on when I tend to swear: So we tried the swear jar. It turns out there’s something motivating about your kindergartner calling you out for your potty mouth and demanding that you pay up. Plus, I don’t keep much cash on hand and whatever I do have goes toward my afternoon vending machine habit. My swearing meant no more Reese’s peanut butter cups. Which was a damn shame. The swear jar was actually starting to work on me. 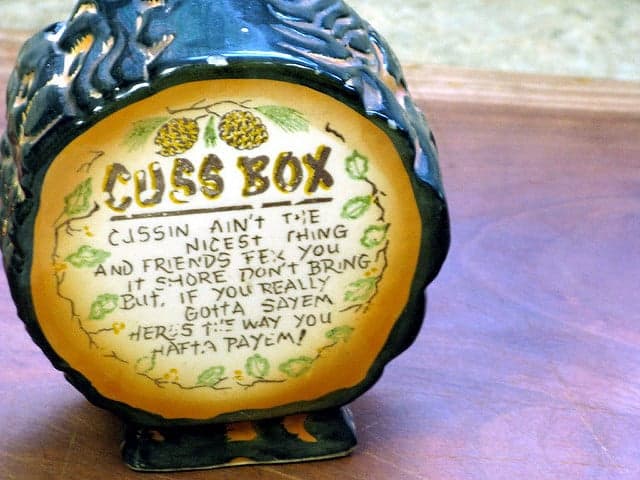 And Then Something Changed

Every time I cursed, Abby got this manic gleam in her eye. “You said a bad word,” she’d say, a huge grin spreading across her face. I guess she’s highly motivated by money. Because now, she wanted me to swear. When I cut back on the actual swear words, she started trying to catch me with just plain negative words. In the grocery store parking lot: “I hate when people try to sneak behind you while you’re backing out!” “Hate’s a bad word,” she said. With that grin again. “Hate’s not a bad word,” I said. “It’s just not a nice word.” “You need to give me a quarter,” she insisted. “No, I don’t. Hate isn’t a bad word. I can say hate.” She didn’t trust me. When we got home, she repeated the story to Ty. I gave him the eyes. The back-me-up eyes. Thankfully, I didn’t have to pay up that day. But that was the beginning of the end for the swear jar. 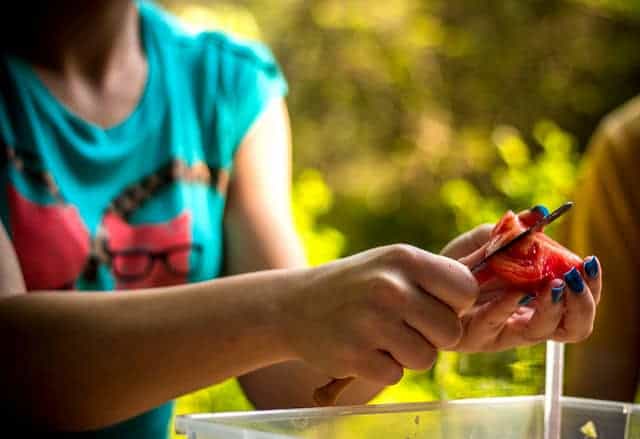 Something a Little Different Than the Swear Jar

The next time I slipped up in front of Abby, I was cutting a cucumber for her lunch and I sliced into my thumb. I said something a little stronger than “ouch.” “You owe me money!” she said. “I don’t think we’re going to do that anymore,” I said, running my thumb under the kitchen faucet. Her face fell. “Why not?” “Well, I don’t think it’s working. The point is not for you to get excited every time I say a bad word.” “Oh,” she said. I finished putting together Abby’s lunch, thinking of what to do with my sailor tendencies. Because when the swear jar isn’t the answer for how to stop swearing, what does work? I could try replacing the curse words with something inoffensive – “fiddlesticks” or “bugger” or “cursed monkey pants.” I do love a good “bugger” every now and then, but it just doesn’t roll off the tongue the way the s-word does when you stub your toe. And over time if everyone used “cursed monkey pants” instead of “motherf’ing”, doesn’t “cursed monkey pants” turn into a swear as well? On the drive home from school that afternoon, I asked Abby, “What makes a word a bad word?” “It’s a word you’re not supposed to say,” she explained. “Is ‘poppycock’ a bad word?” I stifled a giggle. She paused. “No?” “Well, what makes a person a bad person?” I didn’t know where I was going with this. “If they do something bad. Like if they hurt someone or steal something.” “So it’s how someone acts that makes them a bad person or a good person?” “Yes,” she said with confidence. I was quiet for a bit. Then: “You know, words might be the same way.” “How a word acts makes it bad?” she asked. “Kinda. It’s how you use a word that makes it bad. Like if you say a word that hurts someone – on purpose or accidentally – that could make it a bad word.” And then we were home. 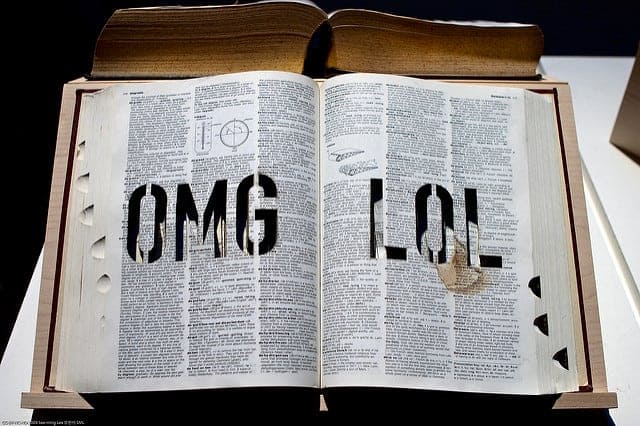 Blast From the Past

I walked to the bookshelf in the living room and pulled the dictionary down. It was pretty dusty because: 2014. “C’mere,” I said to Abby. She sidled up next to me, and I thumbed through the thin pages. “These are all the words in the English language,” I said. “All of them?” Her eyes got big. I nodded. “There’s nothing wrong with any of these words. They’re just a bunch of letters mushed together. But if you said certain words to people, you might hurt their feelings.” She stared at me. I tried again. “Like if you told me you didn’t love me, that would hurt, right?” “Yes,” she said. “So when we talk about ‘bad’ words or swear words, all it means is that those are words that could hurt people’s feelings.” Abby nodded. “Adults can use bad words as long as they’re not hurting anyone. But a bad word coming from a kid would probably hurt someone’s feelings. Does that make sense?” “Yes,” she said. A parenting victory! Related: I Found the Secret to Being a Happy Mom

That night, we were all sitting in the living room eating pizza and watching The Voice. Everyone except Bailey, who likes to come up to get a bite of pizza and then cruise around the house while she gums it. About halfway through the show, Bailey was hanging out in the breakfast nook right behind the couch. I was glancing back every couple minutes, but she was fine. Playing with Abby’s art easel. And then… CRASH. My heart stopped. “Shit!” I jumped up and ran to where I’d last spied Bailey. There she sat on the floor, in shock. The easel had collapsed and crashed to the ground. Away from her. Dear God, thankfully AWAY from her. She started crying, and I scooped her up. Abby walked up next to me. “You said a bad word.” Feature photo by Melissa Wiese 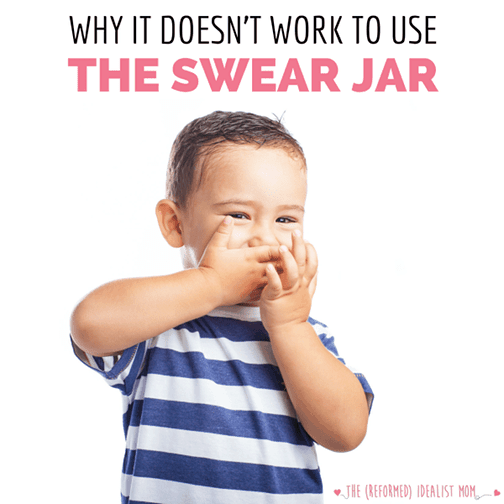 If you lose your patience a lot, you’ll also enjoy this: I Found the Secret to Being a Happy Mom.

How do you handle swearing in your house? Did the swear jar work for you? Share in a comment below!