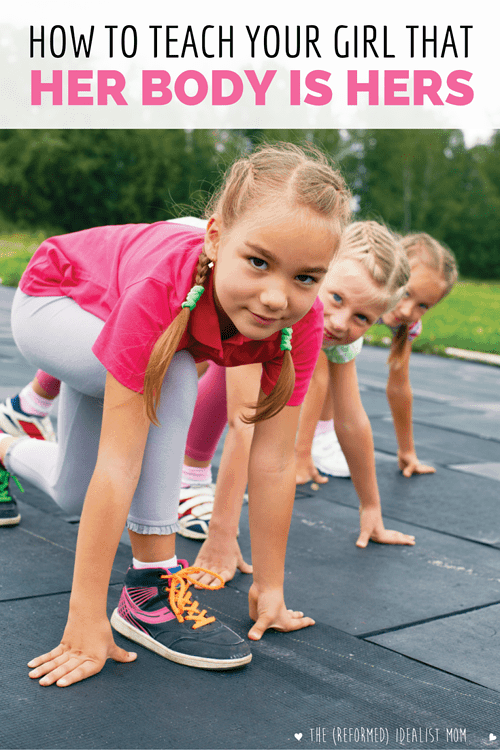 Inside: Follow these 5 tips on how to raise a girl to know that her body is her body, especially in moments where we tend to force kids to show physical affection.

Update: I first wrote this post after a rape case in Steubenville, Ohio, was all over the news in 2013. As a mother of now three daughters and no sons, this post focuses on my own personal research of positive steps I can take as a parent when it comes to how to raise a girl who knows that her body is her body. Obviously, parents of sons may need to teach similar lessons, but this post is written from my perspective as a parent with only daughters.

To be clear, this is not what I am talking about: teaching a girl how not to get raped. That’s absolutely ridiculous, and if you read this post you’ll see what I mean. That said, I do want to take action while my daughters are young. The case in 2013 was a wake-up call that I hadn’t had these talks with my oldest daughter yet. And now to the post…

A couple years ago, I avoided reading stories about the Steubenville rape case for quite a while. As the mother of a young girl with another girl on the way, I didn’t think I needed the extra heartache. I consider myself well educated on the issue, so it was hard to see how I would get anything new from hearing yet another sad story.

Then a friend on Facebook posted this: “I haven’t said anything about this yet, but I do think this is a great starting piece.” Then she linked to a post about it.

And it broke my heart.

My thoughts immediately turned to my two girls. One who just turned five, and one not yet born. My mama bear roared.

“I have to protect them,” I told myself.

When One Bathtime Changed Everything

This is the second time my mama bear has roared at the idea of sexual assault in the last few months. The first time came when Abby was four years old. And I was entirely unprepared for it.

One night, I was sitting next to the tub while Abby was in the bath. She was chattering about her day, and to be honest, I was only half listening.

Abby: “…pulled down their* underwear and asked me to pull mine down.”

Abby repeated herself: “[Anonymous Child] pulled down their underwear and showed me their privates, and then they asked me to pull down my underwear.”

My eyes pricked with hot tears.

Oh, God, I thought. This can’t be possible.

I peppered Abby with follow-up questions until it was clear to me that yes, this was possible. And yes, this did happen to my child. My 4-year-old.

Words spilled out of my mouth, sounding like they were coming from someone else, not me:

“If someone ever asks to see or touch your privates, you tell a parent or a teacher right away.”

And: “Abby is in charge of Abby’s body.”

And: “Nobody should be touching your privates except you or the doctor if you’re in the doctor’s office.”

Then I had to leave the room.

The minute I stepped across the threshold, my chest heaved with quick, heavy breaths. My eyes filled. I had to get away from Abby so she didn’t see my panic.

Later, after I collected myself, I told myself I was lucky that Abby knew enough to say no in that moment, even before my bath-side speech. I told myself that it was good she felt comfortable telling me what happened. And that she didn’t feel ashamed to talk about it.

But still, my mama bear roared.

* I’ve changed pronouns to obscure as many details as possible about the exact situation and those involved.

What I Didn’t Find

Maybe I was an idiot to assume that I wouldn’t have to worry about explaining inappropriate touch to a 4-year-old. We’ve since had several (calmer) conversations about the topic. So much so that Abby’s getting sick of me going over the same concepts again and again. “I know that already,” she says, exasperation in her voice. So I tell her that sometimes we need to talk about important things over and over. 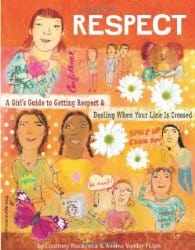 Since I first read about Steubenville a few days ago, I’ve been searching for how you’re supposed to talk to a very young child about this. Yes, ONE DAY, we will have talks about sex and respect and drinking and all that. But how do you lay the groundwork for those later talks, so your teenager will listen to you?

I haven’t yet found practical tips targeted at a mom of a very young child. I did find a letter to a teenage girl, a letter to sons, and even what mothers must do for their sons, no matter how young.

But I will not sit idle, watching the years pass by, and just hope my teenager will listen when the time comes.

I’ve been reflecting on what I can teach Abby now that will serve her well later on in life. My fiance and I have been talking about it off and on since I read that first article.

And I was going to keep it all to myself. It’s a touchy subject, and I’ve now read enough blog posts regarding this case to realize bringing it up is risky. Because you can get some pretty upsetting responses. 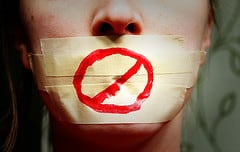 But you know what? I think we’ve all had enough silence on this topic.

To be clear, this is not what I am talking about: teaching a girl how not to get raped.

That said, I do believe that I can lay some groundwork with my girl so that she respects herself and her body. So that she demands respect. So that God forbid, if she ends up in that 20% of women who is sexually assaulted, she will know in her heart that what happened was wrong, and it wasn’t her fault, and she needs to tell someone.

Throughout, I say “your child” but I wrote this for anyone who has a young child they care about in their lives. The truth is that sometimes parents can’t get through to kids in the way a favorite aunt or uncle or cousin or family friend can.

When you find yourself in a situation with your child where your someone oversteps your personal boundaries or your child’s, call attention to it.

A couple weeks ago, Abby and I were standing in an aisle at the grocery store. I was comparing the labels of a couple prenatal vitamins, and Abby was looking at the display of baby toys behind me.

A man walked into the aisle and upon seeing that we were in his way, he put his hand on Abby’s head and steered her out of his way.

He didn’t say “excuse me.” He didn’t say anything. He just put his hand on Abby’s head and treated her like a thing in his way. Would he have done that to an adult woman? At first, I doubted it.

But Abby and I talked about how he shouldn’t have touched her without her permission. That wasn’t okay. She felt the wrongness of it even before I brought it up, which is a good sign. Then I realized that I have sometimes been in that situation, where a man – stranger or acquaintance or co-worker – will put his hand on my back or my shoulder to move me if it’s crowded and I’m in his way. It’s subtle, and it doesn’t happen every week, but our conversation made me remember.

So later that week, when I was waiting in a line and a man was standing very close to me – so close he was bumping into me every few minutes – I was more conscious of it. I turned around, looked him in the eye, and said “excuse me,” with a look on my face that translated as “back the eff off.” Which he did. 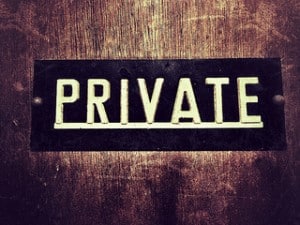 She gets to decide who sees her body. So if she wants the door shut while she’s changing clothes or taking a bath, honor that.

If you’re a parent who’s seen that little body since day one, this may be hard to accept.

But it’s not about you.

If she hasn’t asked for privacy, you can start pointing out situations where you need privacy and explain that’s why you close the door. Like when you go to the bathroom, take a shower, or get dressed. She needs to know it’s okay to set boundaries for who sees your body and when.

When it comes to showing physical affection, it’s your child’s job to decide what she’s comfortable with. Don’t force or coerce or guilt her into being physically affectionate with anyone, including yourself.

As parents, we do this often with family members. When we visit the grandparents, we might say: “Now go give Grandma and Grandpa a hug and a kiss.”

Instead, lean down and say quietly so others can’t overhear: “Do you want to give Grandma and Grandpa a hug and a kiss?”

If she doesn’t feel comfortable with that, that’s her choice. Don’t let the fear of people thinking your kids are rude push you to force physical affection in the moment.

Later, you can talk about it and explore why she didn’t. Maybe she needed to warm up to them after not seeing them for a while. Maybe she just isn’t close enough to them yet. Maybe old people creep her out.

Bottom line? Her body, her choice.

Related: The Best Solution for When Kids Refuse Hugs

4. Be Proactive on the Topic of Inappropriate Touch

This is the one that caught me off guard. Who expects to have to talk to a 4-year-old about this?

I’m lucky that Abby said no to the child who asked to see her privates, but I wish I had talked to her before it ever happened. What if she hadn’t said no? What if the scenario was then repeated again and again? What if it escalated from there?

With my next girl, I won’t wait til something happens before we talk about it.

Related: How to Raise a Feminist Son: 5 Simple But Powerful Steps

5. Listen When She Says No

If you’re tickling your child or showing physical affection and she pulls away or says “no, stop” or “I don’t like that” – listen.

It may hurt your feelings a little in the moment, but remember what matters more.

Here’s a positive solution to that uncomfortable situation where we might tend to force our kids into showing physical affection: The Best Solution for When Kids Refuse Hugs.

How can we lay this groundwork with young kids? Leave a comment below to share your thoughts.