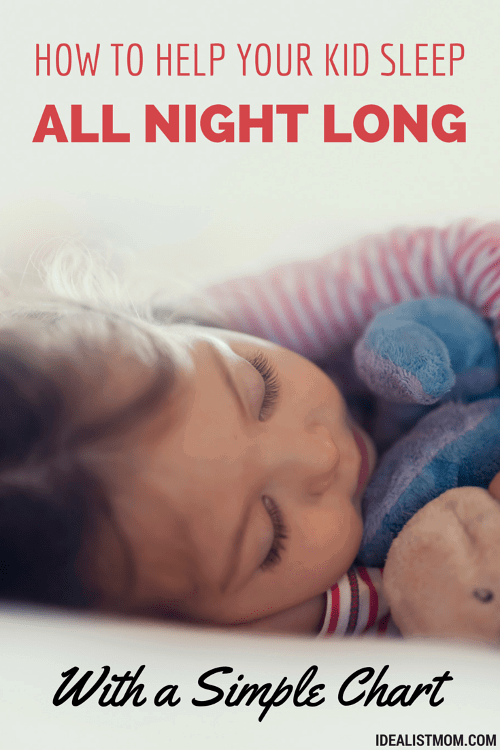 Inside: Here’s a simple but effective chart to make your kid sleep through the night. Works to stop night wakings for toddlers and older kids, too!

My 7-year-old has never been what you would call a “good sleeper.”

Even as a toddler, she woke up multiple times a night.

When she was four, we moved from an apartment into a house. I thought her sleep would get better without 30 other people slamming doors and blasting “Gold Digger” and practicing their best elephant walk above our heads.

Her night wakings as a 4-year-old were just as frequent as when she was a toddler.

With a toddler, I could almost excuse the sleeplessness. Almost.

But she was FOUR and I just wanted to SLEEP.

Desperate to Make My Kid Sleep

The world has no shortage of ideas for getting your kids to sleep through the night. I read books, scoured articles, pored over online forums.

One mom said she locked her kids in their rooms at night.

After reading that, I nearly hyperventilated with what if’s: What about needing to go to the bathroom? What if they got sick and threw up and no one was there to help? What if there were an emergency like a fire and I couldn’t get to her to unlock her door?

That didn’t feel right for our family.

But that didn’t sit well either.

I knew from books I’d read for my corporate job that extrinsic rewards are tricky. If you aren’t careful, you can get in a situation where once the rewards disappear, the desired behavior does too.

Here’s a quote from Drive: The Surprising Truth About What Motivates Us†. (Although I wish I could copy the whole chapter in here for you!)

† This site is reader-supported. When you buy through our links, we may earn an affiliate commission.

[The insights from one study on external rewards] proved so controversial – after all, they called into question a standard practice of most companies and schools – that in 1999 Deci and two colleagues reanalyzed nearly three decades of studies on the subject to confirm the findings. “Careful consideration of reward effects reported in 128 experiments lead to the conclusion that tangible rewards tend to have a substantially negative effect on intrinsic motivation,” they determined. “When institutions – families, schools, businesses, and athletic teams, for example – focus on the short-term and opt for controlling people’s behavior,” they do considerable long-term damage.

Try to encourage a kid to learn math by paying her for each work-book page she completes – and she’ll almost certainly become more diligent in the short term and lose interest in math in the long term. Take an industrial designer who loves his work and try to get him to do better by making his pay contingent on a hit product – and he’ll almost certainly work like a maniac in the short term, but become less interested in his job in the long term. As one leading behavioral science textbook puts it, “People use rewards expecting to gain the benefit of increasing another person’s motivation and behavior, but in so doing, they often incur the unintentional and hidden cost of undermining that person’s intrinsic motivation toward the activity.”

Still, I couldn’t deny the appeal of the sticker chart approach.

I wondered if there were a way to revamp that particular parenting tip to make it more effective in the long run.

What if instead of me being the one handing out the stickers as a reward, my child was in charge of celebrating her own small victories?

I pictured myself cheering alongside her when she was happy with her progress, not manipulating her to behave a certain way.

One day, I sat down with my daughter for a serious but calm talk on her night wakings.

We talked about why her body needs sleep – that her brain won’t grow as well without the right amount of sleep.

We talked about how me not getting enough sleep left me cranky and could lead to me losing my temper more easily.

We talked about the reasons you SHOULD wake your parents up in the middle of the night. What’s an emergency, and what isn’t?

None of this was new to her – we’d covered it all before. But only in snippets here and there – and honestly, usually when I was beyond frustrated. Not a recipe for a healthy conversation, for sure.

But this time, I kept my cool.

After we were done talking, I pulled out a simple wall calendar and a sheet of sparkly happy face stickers.

“When you have a good night without getting out of bed, I want to celebrate that with you,” I said.

I pointed to that date on the calendar. “For example, if you have a good night tonight, when you wake up you can pick out a sticker to put on today’s date to remember that you had a good night.”

She tilted her head. “I can pick out the sticker?”

“Yep. And if you have a good night, I want you to come downstairs in the morning and tell me about it so I can high-five you!”

But Did It Work?

Breaking a lifetime habit of night wakings is a hard thing to do.

The first week, she had two good nights.

And we made a BIG DEAL about those two nights.

High-fives, hugs, and pats on the back.

We asked: “Doesn’t your body feel so GOOD after getting a full night of sleep?”

We said: “You must feel proud of yourself for not getting up out of bed once!”

The next week, she had four good nights.

When she did wake me up on the other nights, I reinforced what reasons would be good to wake your parents – emergencies.

Just a simple visual reminder to help her learn.

The third week? We were up to five nights.

I hadn’t slept that well in YEARS.

What I Didn’t Expect

We hovered around 4-5 good nights the next couple weeks.

But here’s what I didn’t plan for: My child got really excited about having a string of good nights, all in a row.

This wasn’t something I ever suggested to her.

But seeing four happy face stickers in a row drove her to want a full week of seven stickers.

She didn’t want to break the run.

And that, in the end, is what gave us our very first week of SEVEN good nights.

My child and her own motivation to achieve a goal.

Not me nagging her. Not me rewarding her. And definitely not me locking her in her room.

All it took was for me to stand by her side and cheer along with her when she felt proud of what she’d accomplished.

A couple years later, my child’s night wakings started back up again.

But that time, we discovered the reason was not that she didn’t understand the valid reasons for waking your parents in the middle of the night.

As it turned out, she was dealing with real anxiety. We talked to our doctor and read books to come up with a plan for how to help her: 8 Surefire Ways to Calm an Anxious Child.

After implementing those techniques, we’re back on track with our kid sleeping through the night.

Just keep in mind that if your child is struggling with sleeping through the night and tricks like the Sticker Chart 2.0 have no effect, there might be a hidden root cause to explore with your child and/or their pediatrician.

And hang in there as you troubleshoot your kid’s sleep issues! During our non-sleeping child journey, my hope tank has hit empty several times, but we always come out stronger, more knowledgeable, and more well-rested.

Check out What Every Mom Ought to Know About Reward Systems from my friend Rachel.