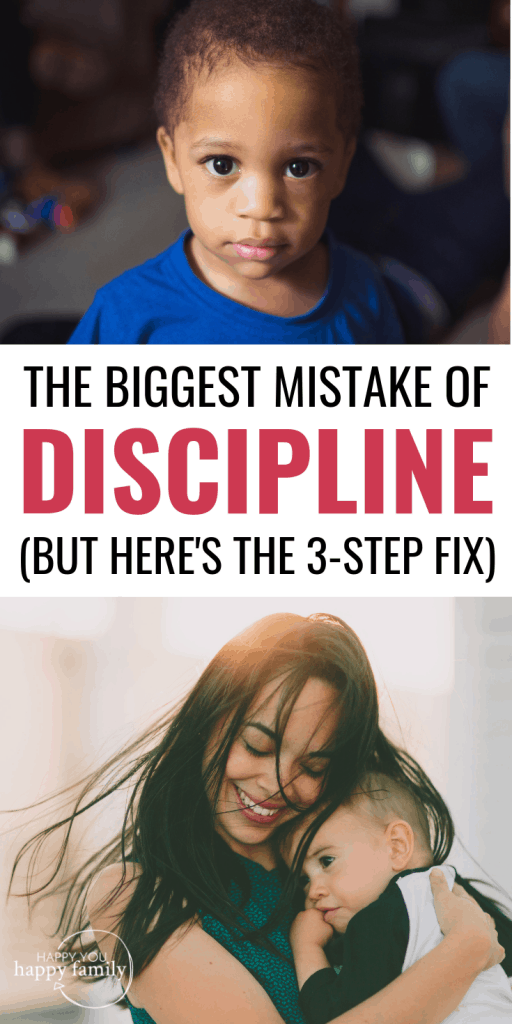 Inside: When you discipline your child, remember this 3-step trick that will help you get through those tough parenting moments while also helping your child learn.

We’d just collected my third grader from school and made it back home again, which meant my two littlest ones had been held hostage in the car for an hour round-trip.

Which is why the second my feet crossed the threshold, 1-year-old Charlie wriggled out of my arms and headed straight for the LEGOs, with 3-year-old Bailey at her heels.

Charlie picked up a bowl filled with LEGOs, and Bailey snatched it from her. Charlie threw her head back and let out a high-pitched wail.

I sighed the sigh of refereeing your thousandth sibling fight of the day. “Bailey, she was having that.”

Charlie’s scream went up a notch, and I resisted the urge to just grab the bowl from Bailey and give it back. “You can have it when she’s done.”

Little Charlie reached an arm out to the bowl, and Bailey slapped it away.

Now Bailey’s face look like I’d slapped her. The determination to keep the toys to herself melted away, and the corners of her mouth turned down.

The streaks running down her face were my warning sign.

With my toddler and preschooler crying in unison, I forced myself to stop. Rewind the tape in my brain.

Those are the words I’d said to my child. But I didn’t say she was mean! I thought.

My mind flipped through a Rolodex of things I wanted to say now. Things I should have said:

Bailey’s shoulders shook from her sobs. Charlie took the bowl of LEGOs from her big sister’s hands, and Bailey didn’t even flinch.

I bit my tongue. This wasn’t the time for logic.

Still, I Didn’t Want to Admit It

But what’s the difference between telling another person they are something bad versus telling them they’re being something bad?

Were these labels helping my children learn an important life lesson? Or were my words introducing shame and sadness, squashing any potential for them to learn from the situation?

I thought back to when I was a kid. When my uncle called me “grumpy” or my sister called me “lazy” or my teacher called me “shy.” Labels stick. More than 30 years later, they stick.

The idea of my careless words to my three-year-old sticking 30 years later? My eyes filled.

I promised myself I’d figure out the answer once and for all – what effect do my words really have on my kids? I spent several nights after the kids were in bed reading article after article, post after post. Here are the highlights of what I found:

All this to say: If my end goal is to teach my kids to not take things without asking, to clean up after themselves, to shut the toilet lid when they’re done – using a label like “mean” or “messy” or “gross” wasn’t moving us toward that goal. In fact, my words were painting a picture of the exact opposite outcome I wanted, effectively inviting my child to live “down” to that picture.

No matter the verb that came before the label, all labeling was doing was hurting my child and putting distance between us.

Related: How to Connect With Your Child: The Magic of the 5:1 Ratio {Printable}

3 Important Steps When Disciplining Your Kid

This epiphany opened my eyes to the immense power my words have with my children. But I’m not naive enough to think that an epiphany is all I need to stop myself from talking that way from here forward.

So I came up with a 3-step plan, and I’ve been using it ever since that day:

Related: How to Go From Angry Mother to Happy Mom: With 5 Simple Hair Ties {Printable}

When your kid misbehaves or just behaves in a way you don’t like, just remember…IRA. I know it makes zero sense, but stick with me.

Picture a sweet grandma. She gently guides kids towards better behavior but never loses her temper – because she raised 10 kids and knows what’s up with this parenting business. She bends down to look a child right in the eye, even though her knees aren’t what they used to be. And her reserves of patience are absolutely limitless. She waits for a child to think through something on their own, her eyes crinkling in delightful expectation of this little brain stretching and growing right before her very eyes.

This grandma is my hero, and her name is Ira. In Hebrew, Ira means “watchful.” Ira is also the short form of a Greek name that means “peace.”

And so in these tough parenting moments, imagine Grandma IRA right by your side – a watchful, peaceful soul. IN through your nose, REPORT what you see, and ASK for your child’s ideas.

Related: 10 Miracle Phrases to Help You Reconnect With Your Child {Printable}

Can You Un-Stick a Bad Label?

On the day I told my daughter she was being “mean,” I saw the power of my words in her drooping shoulders and tear-streaked face. And I got it, finally.

Later, my research would take me to IRA. But in that moment, I understood what I’d done.

I dropped to my knees in front of Bailey and put a finger under her chin to lift it. Looked into her eyes.

“I’m a nice person,” she repeated.

I opened my arms, and we melted into each other.

And even though I wish I could take back what I said, I’m grateful to my preschooler for the hard parenting lesson she taught me that day: My words shape my child’s vision of herself.

If I want her to grow up to be a kind, helpful, thoughtful person, calling her (or her actions) “mean” certainly isn’t helping. Tearing people down isn’t what you do when you want to people to learn and grow. Even if those people happen to be three feet tall.

I pulled back from our hug to see whether Bailey was starting to calm down. Her eyes were still rimmed in red, but the tears had stopped.

“Will you forgive me?” I asked.

She nodded, and then a pudgy baby hand appeared between us.

Little Charlie, holding out a LEGO that had been in the coveted bowl. A peace offering.

And in response, Charlie did the hand sign for “thank you.”

An impromptu exchange of kindness between a three-year-old and a one-year-old.

I smiled big and scooped Charlie into my lap next to Bailey. “You guys are awesome sauce.”

Now, that’s a label I don’t mind sticking around for 30 years.