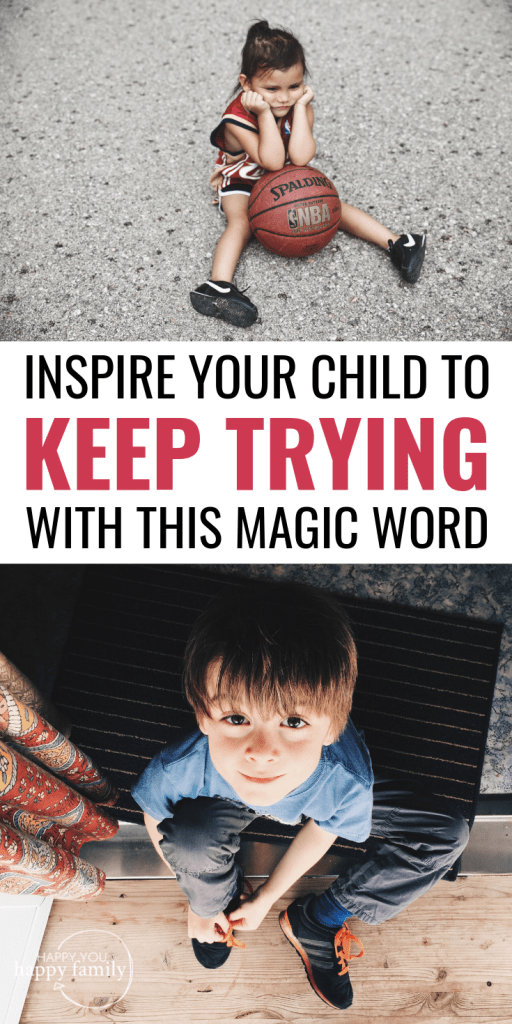 Inside: The most common response to negative self-talk in children doesn’t work. When your kid says, “I can’t do it,” use this powerful word to inspire them.

When one of my kiddos was preschool-aged and was learning how to do something new, she would stick her little tongue out to the side and figure it out, no matter how long it took her. (And she definitely wouldn’t accept help from me.)

But one day, Bailey said something under her breath that caught me off guard – and not in a good way.

My husband was peeling carrots for dinner, and she walked up to him with a big smile on her face. “Can I do that?”

She’d never peeled anything before, so my mama heart squeezed at the thought of a sharp peeler in her tiny hands. What if she slips and cuts herself? What if she slices off a chunk of her thumb? What if we end up in the ER?!

Luckily, my husband is way more chill than I am, so he said, “Sure.”

I caught Tyler’s eye and raised an eyebrow at him, and he just smiled.

He got Bailey set up at the breakfast table with a bag of carrots and the peeler, and he gave her a quick safety lesson in Vegetable Peeling 101.

When she picked up the peeler, I felt an adrenaline surge.

But I knew enough not to hover, so I hung back in the kitchen and didn’t say a word.

Download: Get these fun coloring posters for your child to teach them the power of hard work and sticking with a problem.

And Then She Said It

Bailey stuck her little tongue out to the side and concentrated on running the peeler against the carrot.

I moved closer and opened my mouth to say, “You’re doing it!” But before I could get the words out, she said something under her breath that stopped me.

She let the peeler and carrot fall to the table, and her chin dropped to her chest.

And I just stood there, my mouth open but no words coming out.

What happened to my determined, persistent little learner? Since when did she talk down to herself?

Related: Here’s the Secret Phrase to Turn Your Kid Into an Amazing Student {Printable}

The Danger of Negative Self-Talk in Children

Many parents instinctively know that calling a child “stupid” could influence that child’s idea of how smart they are and cause them to behave differently when learning something new. But as it turns out, a child calling themselves “stupid” can have the same effect.

Let’s suppose you’re back in high school, and you’re nervous about a big science test coming up. You tell yourself, “I’ll probably fail anyway, so why even study?”

By telling yourself that, you’ve given up before the test even happened and envisioned a future for yourself where you’ll skip studying. If you do skip studying, you’ll have increased the chances that you’ll fail the test.

Instead, consider what would happen if you told yourself, “I’m nervous about the science test, but studying will help me feel more confident.” You’d be more likely to study and therefore more likely to do well on the test.

This phenomenon is called a self-fulfilling prophecy. In other words, when you declare something like this to yourself or another person, it’s enough to influence your behavior to fulfill that declaration of “truth.”

Related: 7 Surprising Ways to Help Your Kid Do Better in School, According to Science

But the Most Common Response Doesn’t Work

When kids engage in negative self-talk, it may sound like:

Because we love our kids more than anything else in the world, our gut reaction as a parent is to convince them that their words aren’t true:

You are good at this!
Yes, you can do it!
You will learn to read. I believe in you!

But have you noticed that when you try to fight your child’s negative self-talk with your own positive words, it doesn’t work?

I learned that lesson the hard way with my oldest child. It took me a while to realize that when I unleashed a slew of positive affirmations, it actually made her attitude worse. She’d furrow her brow, cross her arms on her chest, and shut herself off from me.

I’d unknowingly turned her frustration into a power struggle instead of addressing the heart of the issue.

This Is What We’re Missing

Here’s what your child is really saying when they talk bad about themselves:

I’m frustrated.
I feel bad that I made a mistake.
I’m scared I won’t be able to figure this out.

When we respond with positive affirmations, this is what our kids hear:

I don’t know about you, but when I’m feeling those emotions and someone responds by telling me not to feel those emotions, I don’t take it very well.

Which means the real problem is that we’re not stopping to empathize with our kids’ big and scary emotions. In that moment when your child gets easily frustrated and their confidence is shaken, they don’t feel heard.

So what can you do in that moment when you hear your sweet child saying mean things about themselves?

Download now: 9 Best Mindset Posters That Will Inspire Your Child to Keep Trying

One Word That Will Flip Your Child’s Negative Self-Talk

A while ago, I stumbled on one word that helps me catch myself in that moment so I can empathize with my child and and help her move forward in a positive way:

Adding this one word builds your child’s confidence by giving them a vision of their future where they do “get” it. They’ll make choices that will help them live up to that new “truth.”

For the best results when teaching optimism, grit, and stick-to-it-iveness, you’ll want to follow up “yet” with a little more guidance:

And all you have to remember is YET. Yet, Empathize, Turn it around.

Can One Word Stop Negative Self-Talk in Children?

To be clear, we can’t wave our magic mom wands and immediately stop all negative self-talk in children.

But adding “…yet” is a simple and positive response that can help nip negative self-talk in the bud and flip it into a positive mantra for your child.

On that day that my preschooler threw down the vegetable peeler and that sad little carrot, she’d said “I’m not good at this.”

I wanted to say, “It’s the first time you’ve ever tried to do this! You’ll get better! Just keep trying!” Which would have turned the whole situation into an argument with us on opposite sides.

But instead, I caught myself and said, “…yet.”

She looked up at me, and I moved forward to close the gap between us.

Bending down so we were at eye level with each other, I said, “You’re frustrated because you’re learning something new, and that’s hard.”

“You’re not feeling good at this yet.”

I reached out with one hand and rubbed her shoulder. “How could you get better at it?”

She shrugged, and I waited, keeping my mouth shut.

After a few seconds, her eyes lit up with that determination I know and love, and she sat up straight in her chair. “I could use a knife.”

My eyes got big, and I heard my husband chuckling in the kitchen behind us. Not exactly the direction I wanted things to move in.

“You could. That’s true.” Buying myself time. “But…using a knife would take even more practice to learn than the vegetable peeler. Can you think of anything else that would help you with the peeler?”

She tilted her head to one side, thinking. “Can you show me again?”

I smiled and picked up the peeler. The power of yet.

Print These Coloring Posters to Change Your Kid’s Mindset

I’ve tried countless parenting techniques to encourage a growth mindset in my kids – some of them total duds.

But I wish I’d created these special mindset posters much earlier because the results have been fast and impressive with my grade-schooler and my preschooler. (Even my toddler repeats the growth mindset mantras she hears from her older sisters!)

Thanks to these mindset posters, my kids have internalized powerful, positive mantras to remind them that hard work and sticking with a problem will help their brains grow – and will help them become the people they want to be. (Check out the science behind these growth mindset posters that makes them so powerful with kids.)

Download your own set of mindset posters here, and you’ll unlock your child’s true potential for working hard, not giving up, and learning from their mistakes.

Download now: 9 Best Mindset Posters That Will Inspire Your Child to Keep Trying

If your child struggles with negative self-talk, they may have a fixed mindset when it comes to learning new things. Get more tried-and-true tricks to help develop a growth mindset here:

Have you found any helpful tricks for responding to negative self-talk in children? Share in a comment below!